So last night the Mama Tits show started at 9:30 but it was first come first seated so I got there shortly after 9.  As I was standing in the queue to get my ticket, I couldn’t help but notice the tight and short white shorts the 2 young men in front of me were wearing.  Hmmmm I thought, those look like the kind of clothes gay men might wear.  Wait a minute!  Who is Mama Tits?  She’s a drag queen.  What exactly is that?  I’m not really sure.

I was a bit nervous because the 3 young guys behind me were anything but gay, in fact, if I guessed, they were 18 year old small town Saskatchewan boys.  Thankfully as the White Shorts walked by, they didn’t say anything.  Soon I was given card number “9” which meant I figured I’d be seated next to last.  I stood in the lounge where there was a horrible singer supposedly entertaining, had a beer and soon was seated in the small circular theatre in a perfect seat.  I didn’t notice anything different about the crowd until shim - that’s a combination of she and him, walked on the stage and after saying hello said that s/he always wants to know who is at her show.  Well, any tour or show I’ve been to that asks that wants to know what countries you’re from so I’m wondering who else might be from Canada and especially Saskatchewan.  Well, no..... that isn’t what shim wanted.  “Where are the lesbians?” she shouted.  A fairly loud cheer erupted.  Oh shit, I thought.  “Where are the straights?” - a smaller noise was made.  “Where are the homosexuals?”  A very loud cheer ensued.  Okay, what exactly is a drag queen considering mostly lesbians and gays come to the show?  I googled it when I got home and found that it’s a man who dresses as a women for entertainment purposes. And entertain us s/he did.  S/he told a brief story of her life: how he grew up gay in Oregon and moved to NYC for love at age 17.  Why?  “Because you follow ‘the d’?”  That relationship didn’t last long and soon he was on his own trying to make ends meet.  The main message was that you can’t love someone else if you can’t love yourself first and isn’t that the truth!  His voice was awesome and each song s/he and her sidekick Diego sang contributed to the story.  It was an excellent night once I got over my surprise, but I’m surprised a lot of the time because I don’t really think about what something is going to be like.  Take for instance my bicycling in Spain last year.  I chose to bike because I didn’t like walking at the time and so poof, just like that, I decided I’d bike 500 km.  I haven’t biked 100 km in my whole life, yet try to do 500 k in 10 days?  That never crossed my mind until I got on my too loaded down two wheeled pony and started off for Santiago.  Whoops.  It turned out all right but I never think of the consequences of a decision.  I just do it and live through whatever it throws at me.  So, tonight I had to chuckle at myself once again because I had no clue who I was going to spend a couple hours with at a show - certainly not the same crowd I serve drinks to at the Dekker Centre!

S/he started out in a black mumu.  I’m not sure if she was wearing a partial mask but it looks that way with that large crease across her cheek- 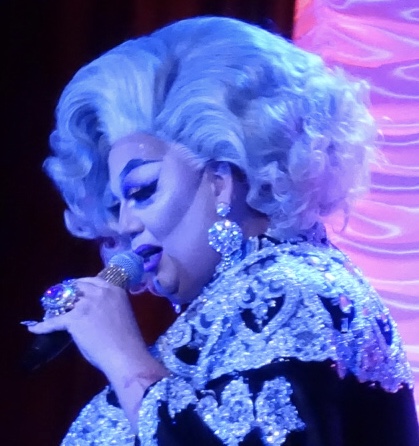 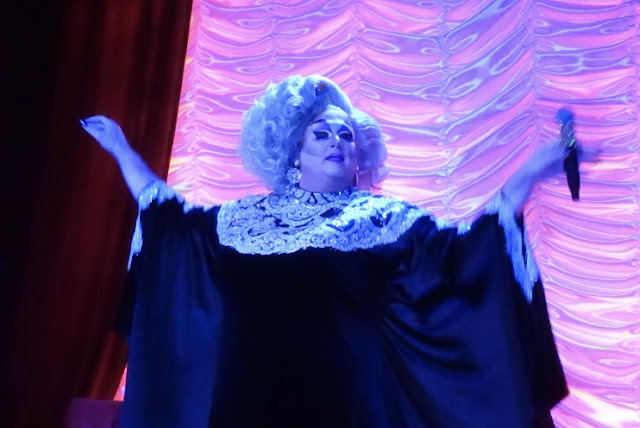 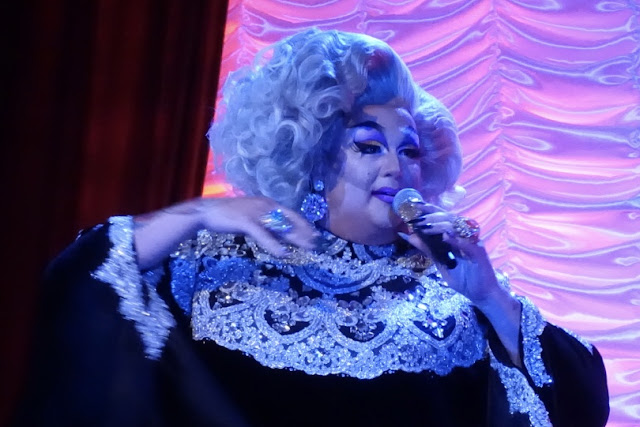 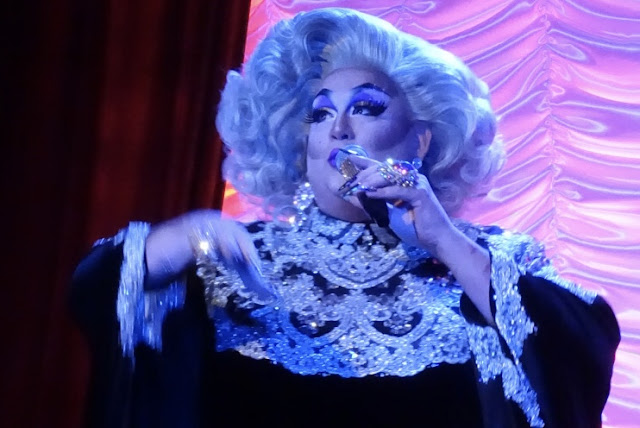 Underneath she wore  a red number- 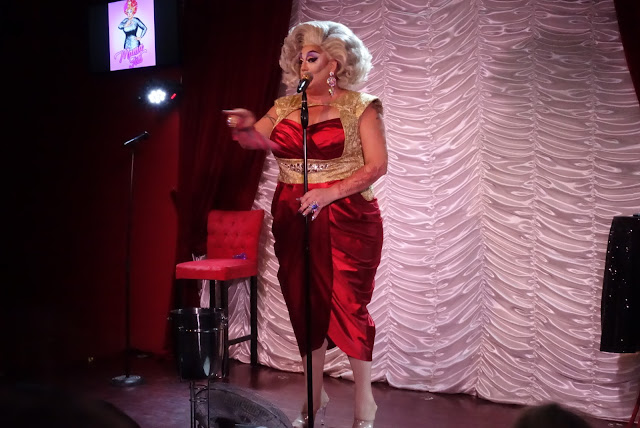 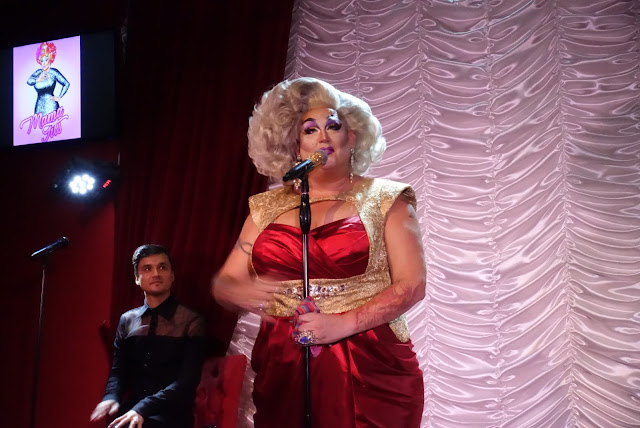 And eventually got down to my favourite outfit- 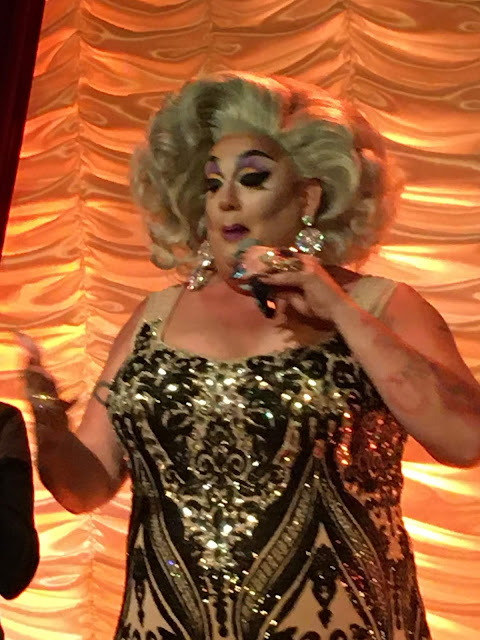 Diego sang great harmony and he seemed so little beside her- 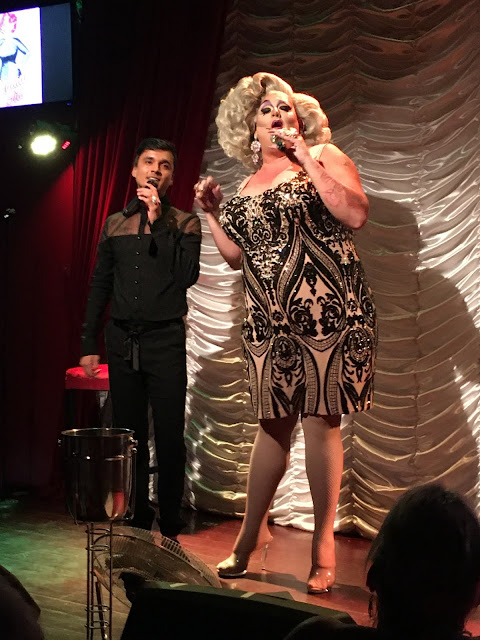 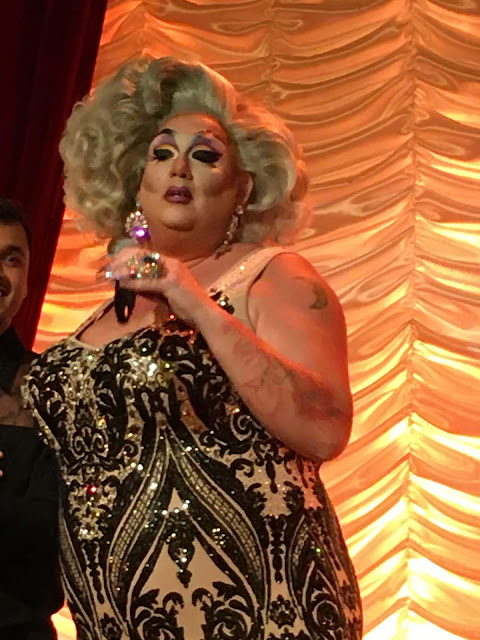 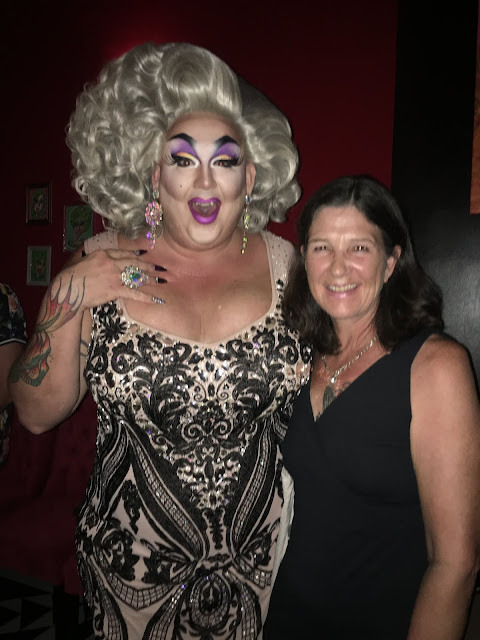 So during the performance the Saskatchewan boys, or whoever they were, threw a coin towards Mama Tits.  She said she wasn’t a hooker and how dare they.  Well then after that, this little creepy looking fellow came to the stage numerous times to put money in her jar.  He crept along - I don’t know if he was gay or not, I don’t think so but it was like a form of apology.  So weird!

This morning was cooler so I walked down to the Malecon.  I found a place that served beer for the same price as you can buy it in Oxxo so spent awhile there visiting with 6 men from Kindersley and Swift Current who are going on a 36 hour fishing trip tomorrow hoping to catch a 500 pound Marlin.  Next I visited with a couple who used to live at Harvey Heights by Canmore but now live in Toffino.  He referred me to what looks like a very interesting website called https://actionalberta.ca/  Check it out!  After a few beer, I picked up more shrimp and came home to cool off. 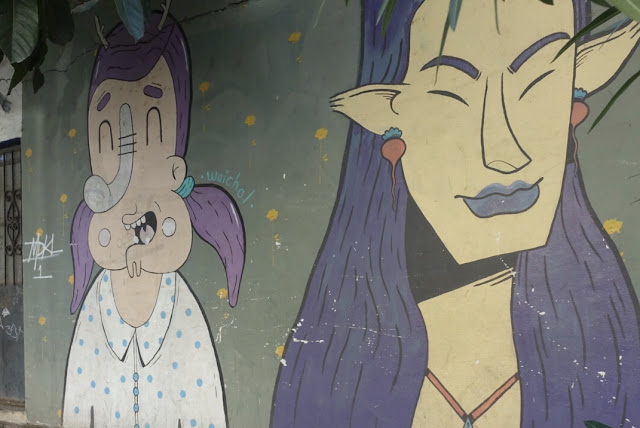 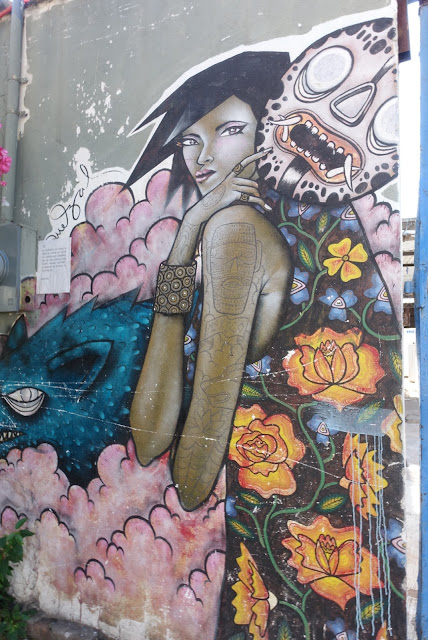 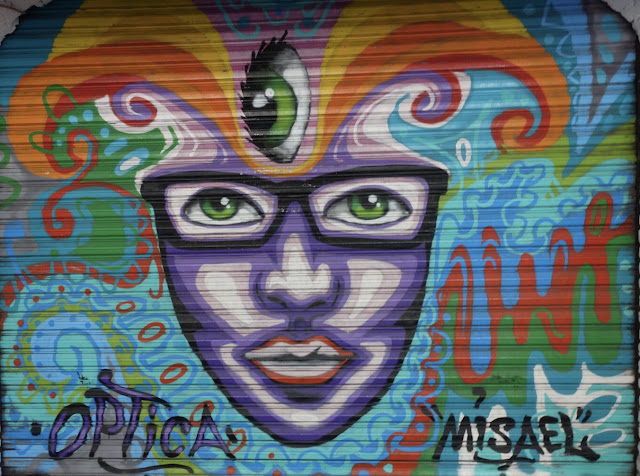 At 3:30 I headed to Esmeraldas to watch Winnipeg demolish Calgary in the Western semi final.  I think we can do better against Winnipeg than Calgary so I was happy with the result.  Supper was guacamole from Manny’s.