What a day!  It started out very normally.  I was up early, had some coffee, went down to the Malecon to get a walk in before the streets and sidewalks were too crowded, came home for breakfast and went to the gym.  Today’s workout was a lot better than yesterday’s.  Today exercises were balanced between the upper and lower body and I strategically positioned a fan so I didn’t sweat to death.  Viviane was there and brought me some electrolytes.  The way I’ve been sweating, I think I’ll get some more just to stay well.
After the Crossfit session, I was told the yoga master wasn’t coming so Viviane and I left and stopped to see Fernando and Mary at their juice stand and then went to her Viviane’s.  Well, I couldn’t believe it.  Actually I could because I knew the moment she told me she lived by the river that she lived in Molino de Agua - the condo complex I would choose to live in here if I were a millionaire.  Sure enough, after a short tour/explanation along the way of the many businesses she’s familiar with and where to buy the best this or that we arrived.  Viviane Moos is a documentary photographer who has taken pictures pretty much all over the world. You can check her out at Vivianemoos.com.  She has a lot of her pictures enlarged and on the walls of her gorgeous home where the view can’t be beat- 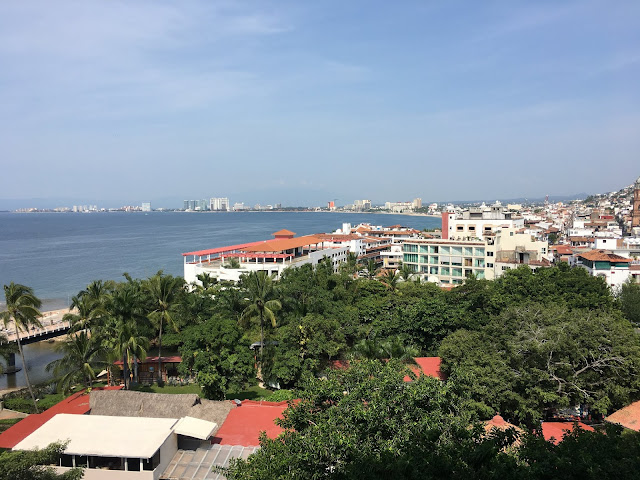 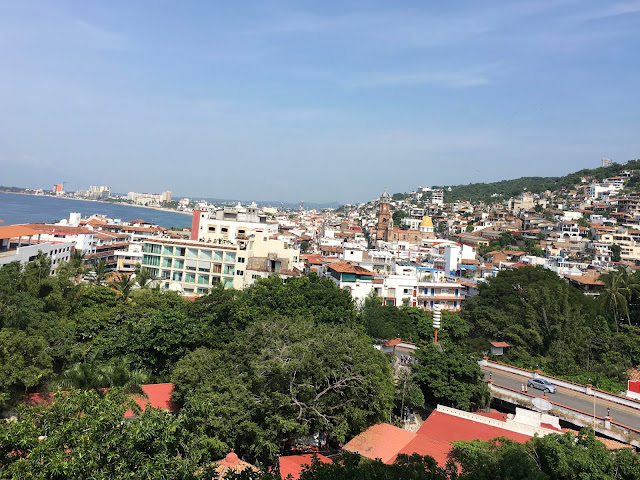 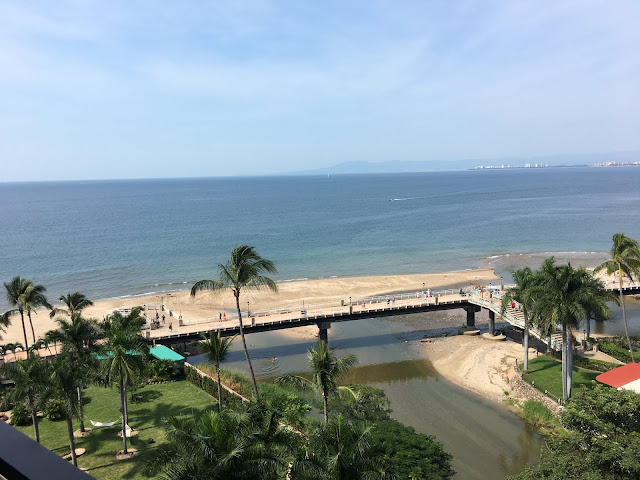 They sold a condo in the Industrial area of Manhattan a couple of years ago because when they bought it, no one lived in the area but now it’s the most trendy spot in NYC.  It was a 2250 square foot penthouse with many windows that they bought for cheap years ago and sold for millions.  They moved to PV in January 2018.  They brought some furniture with them but the previous tennants also left some. They rarely if ever close the windows and why on earth would you?- 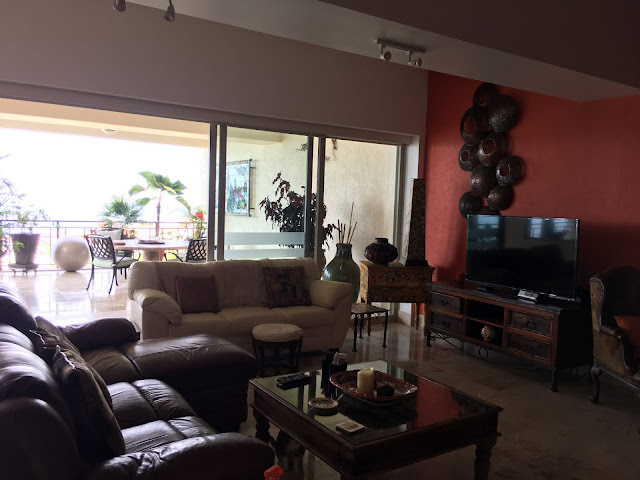 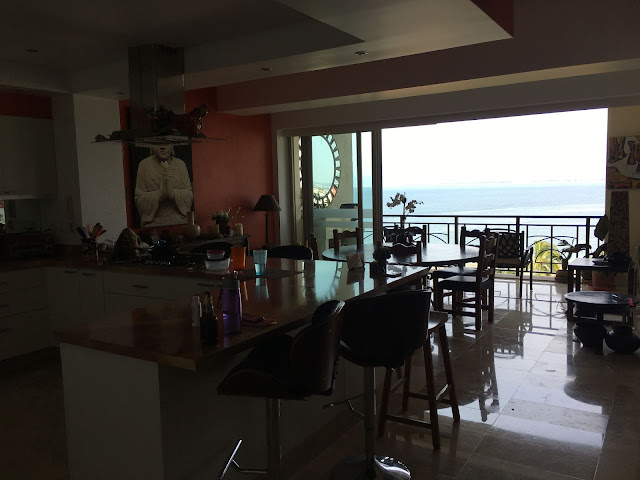 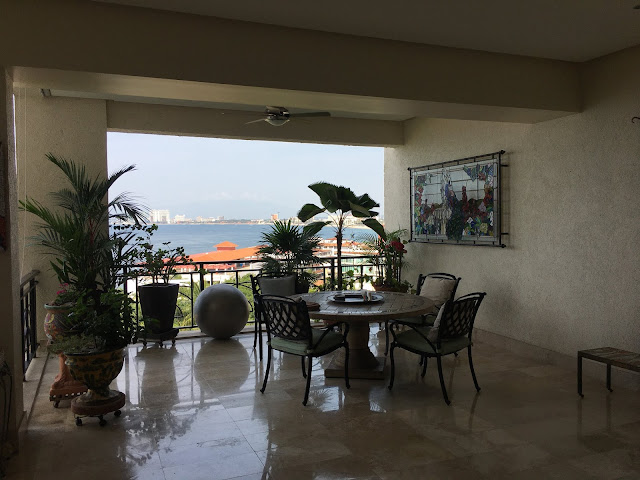 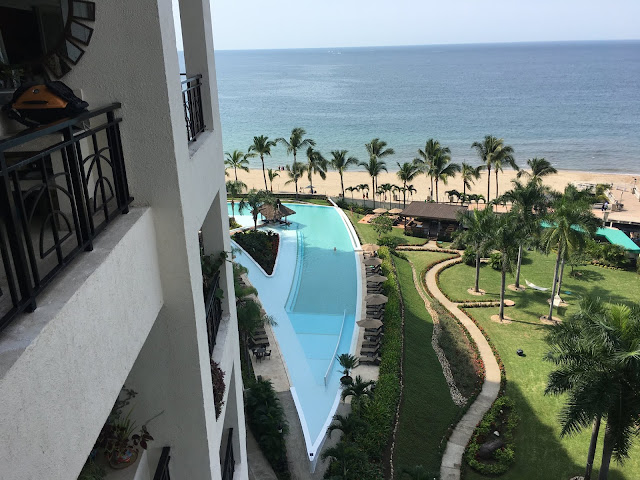 After a great visit with Viviane and her husband Lee, who was married to a woman from Melville! of all places and has lived all over the world and done “too many things to even start explaining” including being a business partner with Rock Hudson in Hong Kong, Lee went to play chess and Viviane and I went down under the bridge to get oysters.  They were delicious but apparently smaller than normal.  They’re not local but from the province of Sonora but maybe tomorrow there will be some local ones.

Daniel dumped out the bag- 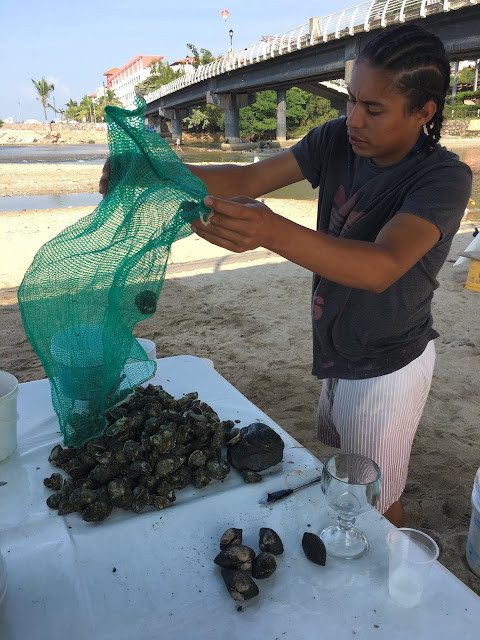 and then proceeded to shuck them- 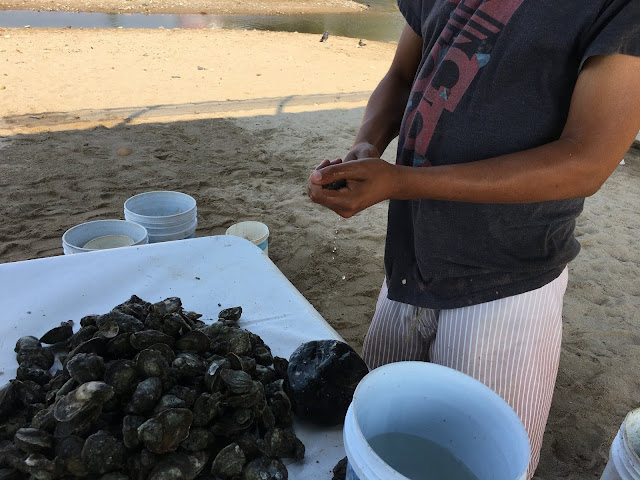 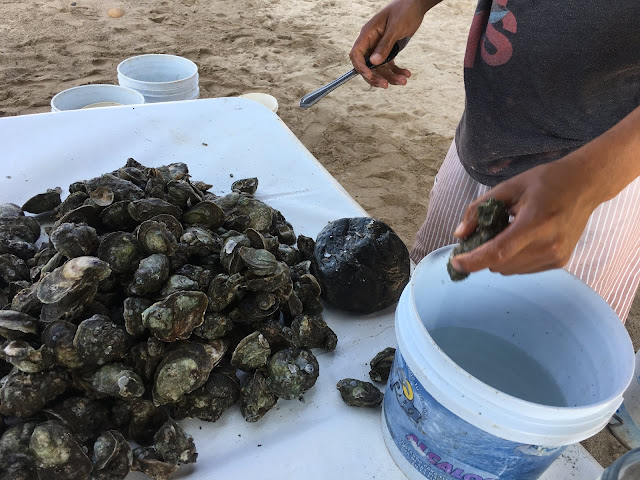 It’s a family affair with Daniel’s wife and her sister Doris also working.  And, what to pick for salsa?- 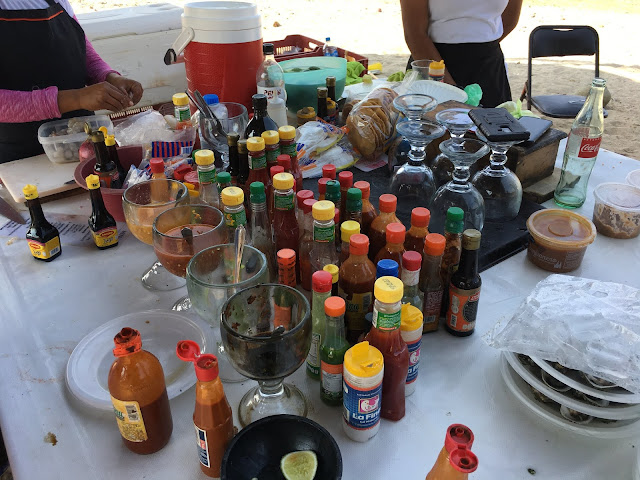 I was thinking of Uncle Nico, which often happens.  One time we met Jane in New Orleans for a weekend while she was studying in South Carolina.  We couldn’t walk by an oyster bar without going in for a dozen- 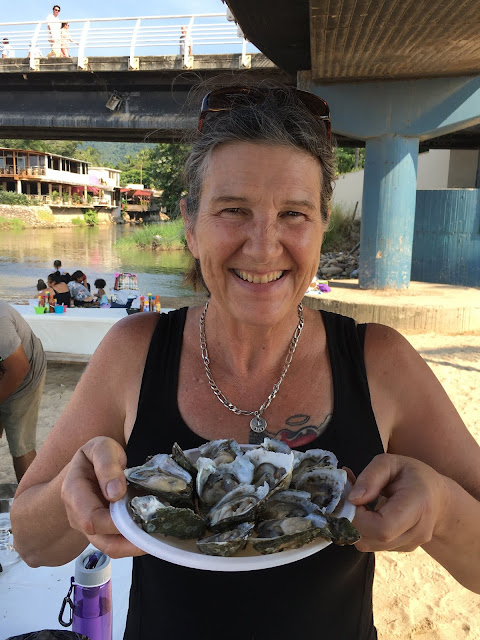 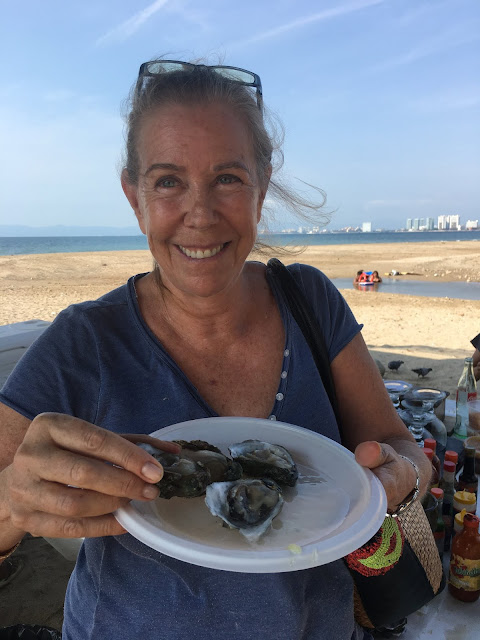 They also had another kind of shell sitting there- 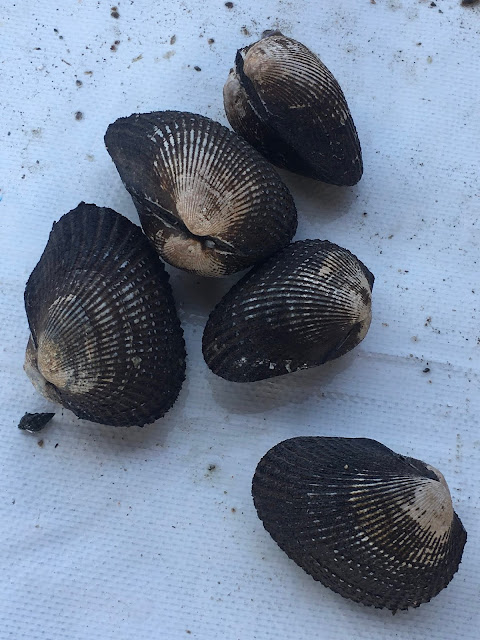 So we tried that too.  It was squirming as I put it in my mouth.  It had quite a different texture from the oyster - heavier and more full bodied.  It tasted great too- 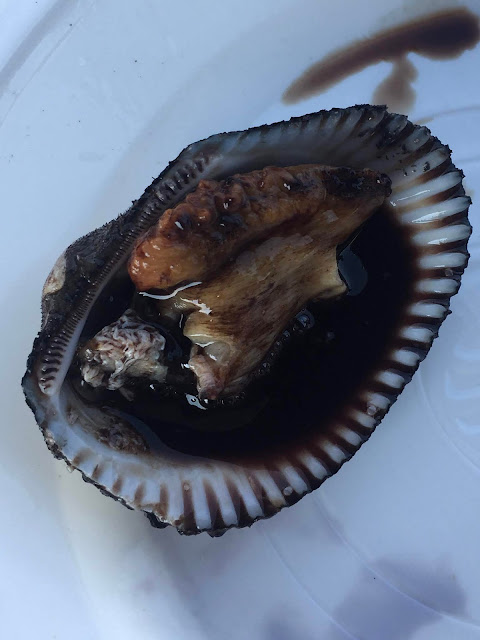 Then we were off for lunch to a local place called Dianita’s.  For $4.80 one orders from a set selection of five dishes that change daily and it includes as much cucumber and basil juice as one can drink and sopa con frijoles- 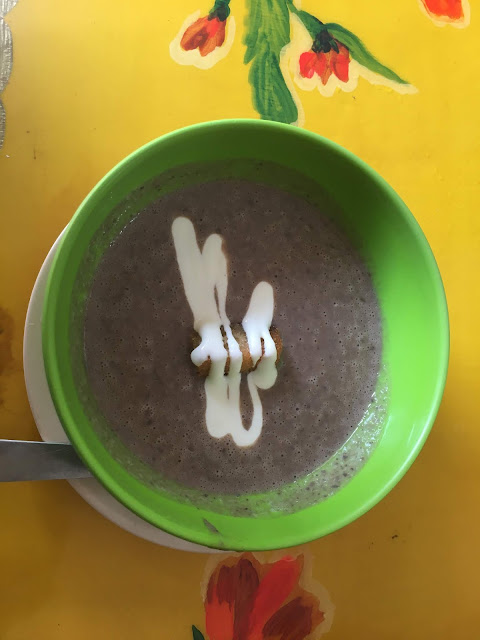 My main was a very tender beef stew with more frijoles, rice and nachos.  I love Mexican nachos- 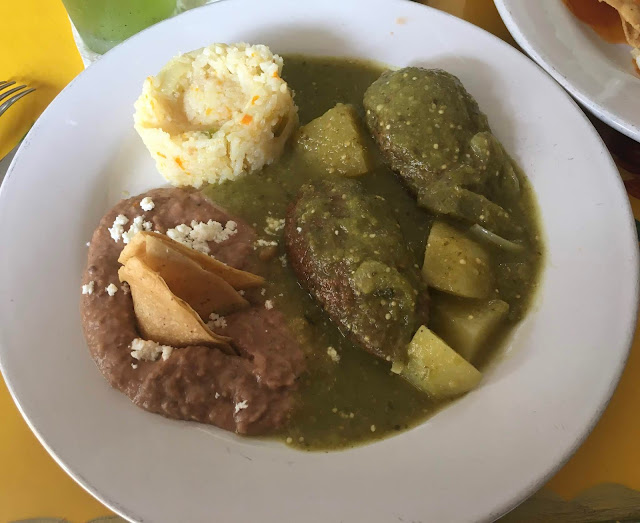 Viviane had something she didn’t like at all and she’s not sure why she ordered it in the first place- deep fried tacos stuffed with ricotta cheese.  The stuffing was good but not the shells- 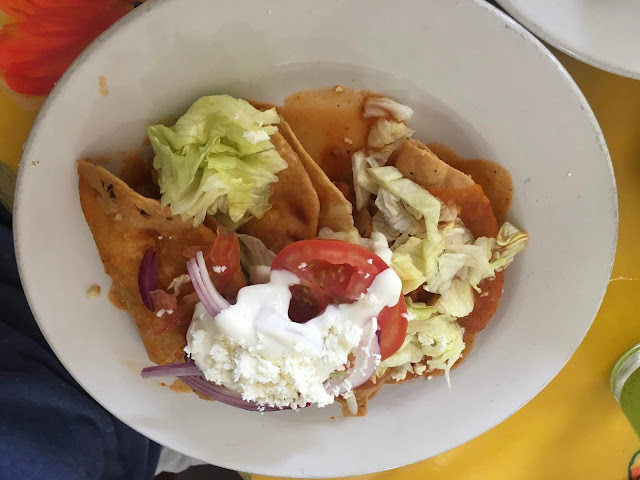 We just had the best time talking about our adventures!

I got home at 5, still in my sweaty gym clothes and sitting on the outside step waiting to get in were a couple of older Argentinian women.  One was very friendly, the other was a typically snooty Argentinian, a country in South America who thinks it belongs in Europe.  I will agree that Buenos Aires is beautiful but Argentina does not belong there.  Lesson #1 - be happy with whom you are!  The friendly woman was on the phone with Sean trying to figure out the lockbox which holds the key and is opened with a four digit combination code.   Friendly gave me her phone and Sean told me the code and in no time we were inside.  I took Friendly up to the room but Snotty stayed at the bottom of the stairs until Friendly came down to carry their gigantic suitcases up.  Snooty commented to me that we seemed quite far from the beach and Malecon but I explained it was only 6 short blocks away.  They will have paid the same as me - twenty some dollars/night so you’re not getting the Molino de Agua honey!  That’s another thing I don’t get.  Why, unless you’re permanently moving somewhere, would you take a large suitcase through cobbled streets, up and down sidewalks and stairs and in and out of cabs or buses?  I just don’t get it.  Anyway......

I’m enjoying my AC and looking forward to another sunny day in paradise! 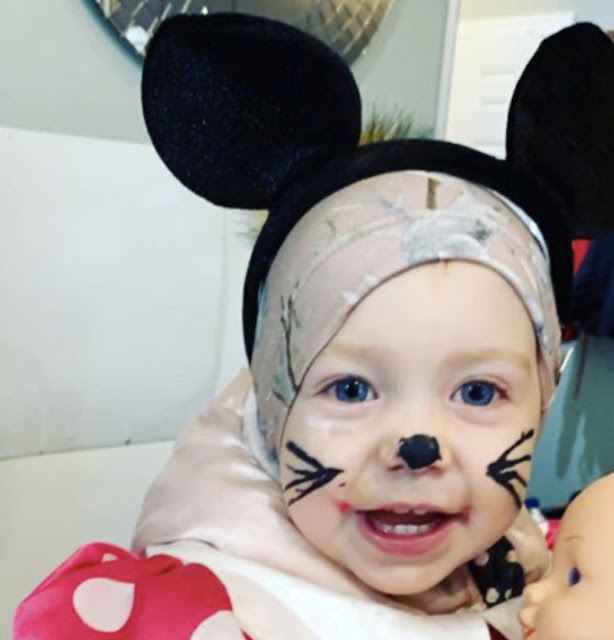 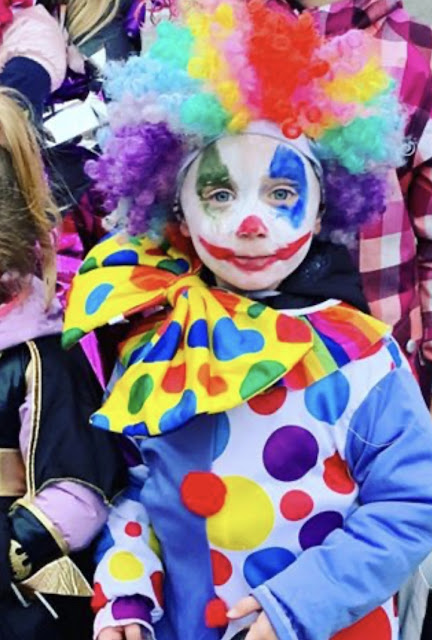