What a life I have!  I spent three hours this morning, strolling through Centro, sort of following a walking tour I found online.  I found a Lutheran Church but it was locked up.  I knocked on the door of a neighbour and asked about it.  He said there would be a service at five tonight, so I’ll go back... maybe.

Construction on the Juarez Building started midway through the 19th century.  Today it’s a popular restaurant in Plazuela Mochada- 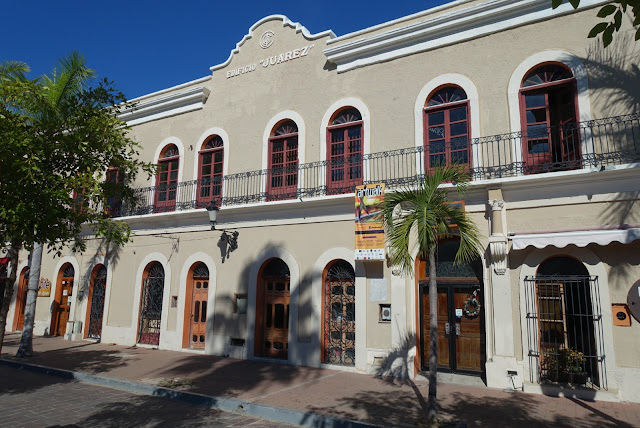 The German Notion’s Store was founded in the 1840s and it functioned for a hundred years.  All sorts of things could be bought here - notions, hardware, tile, toys, jewelry. watches, art, fine furniture and musical instruments.  Unfortunately during World War II, the owner, who was of course German, was forced to close and flee Mexico- 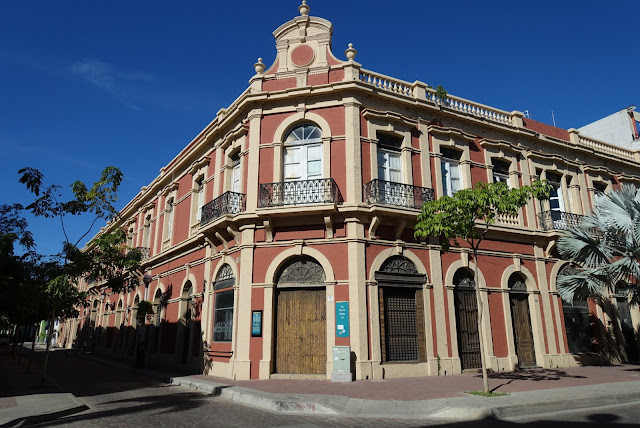 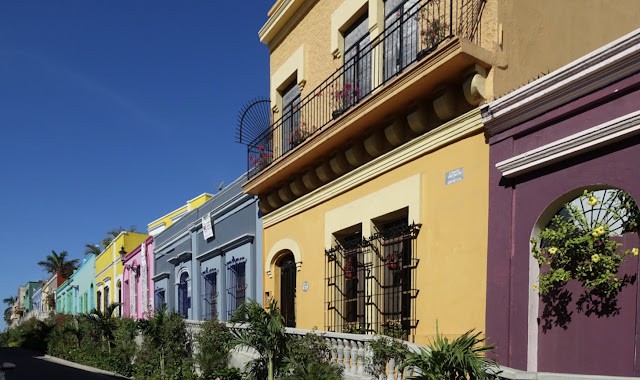 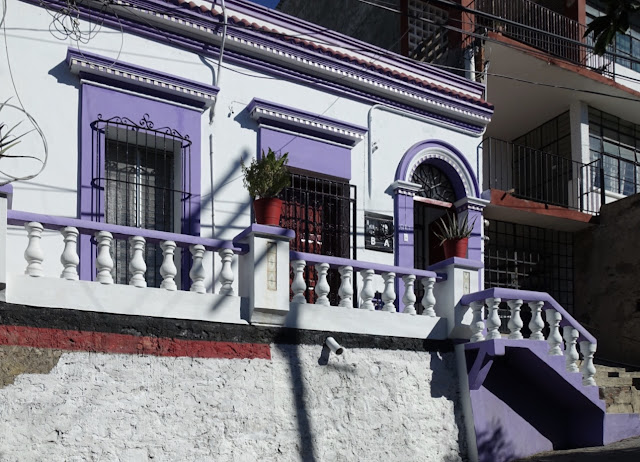 I’ve been by the Freeman Hotel, but not stopped in.  The view from the rooftop bar is awesome- 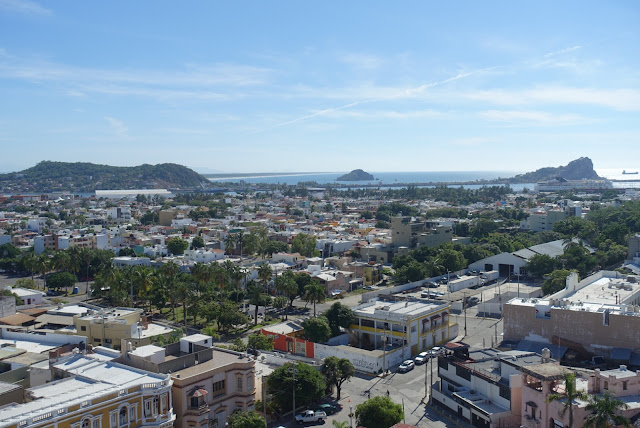 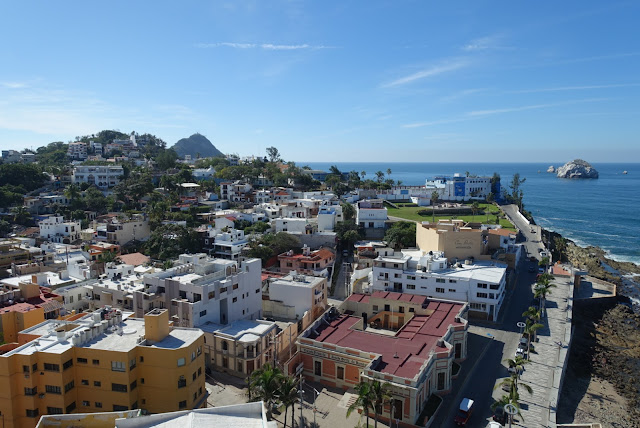 Along the Malecon, looking north- 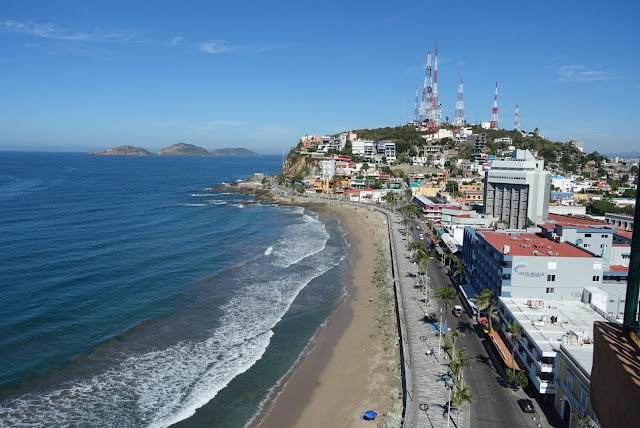 Looking north-east.  My place is just overtop the Basilica spires to the left of the tall white building- 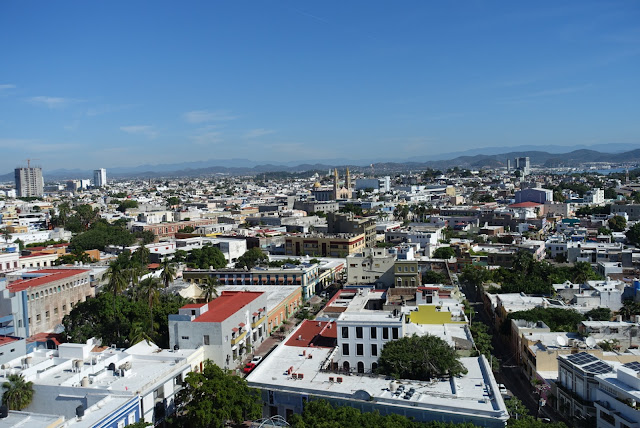 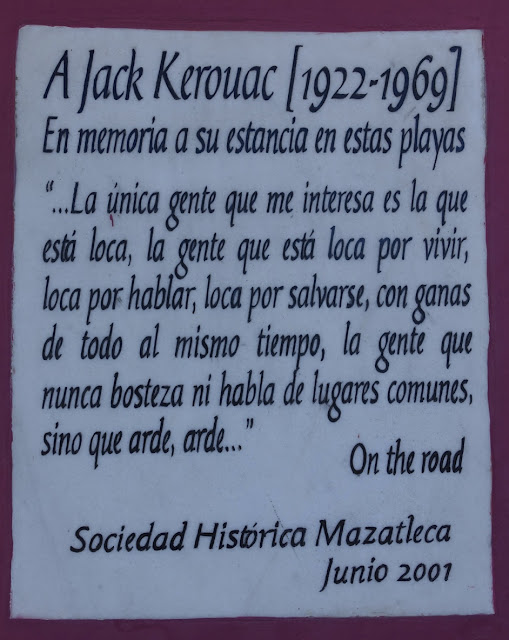 I stopped at the Museo Arqueologico and think I was told to come back Wednesday when the temporary exhibit of a mammoth would be open.  Nearby is a piece of train track.  May 5, 1877, mules started pulling trams, thus beginning public transportation in Mazatlan- 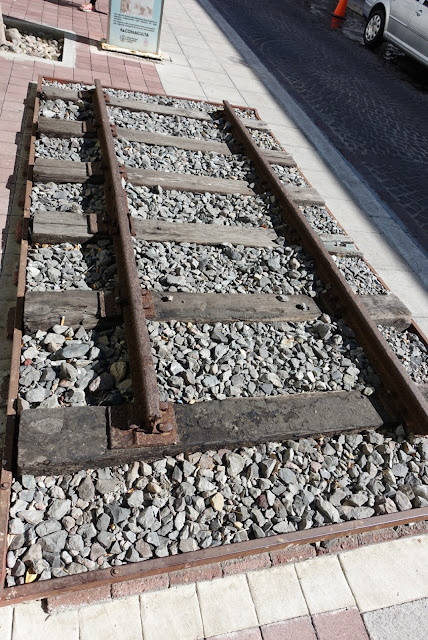 The Plazuela Hidalgo is also called Plazuela de los Leones.  It’s formal name is for Miguel Hidalgo who is the Father of Independence and it’s the second oldest square in the city after Plazuela Machado.  It gets its more common name from the two lion sculptures that flank the entrance to the biblioteca- 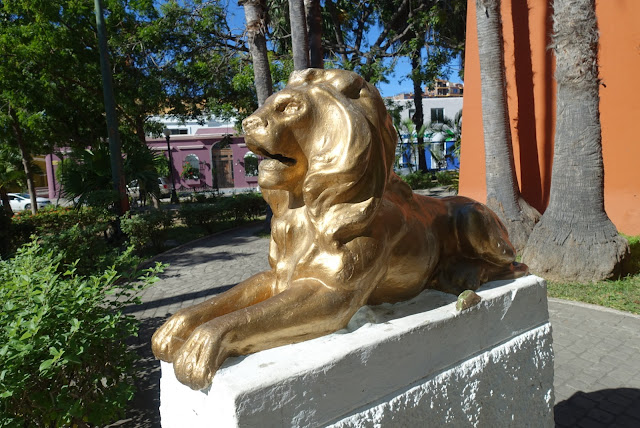 I stopped at the Mercado for lunch and found zarandeado or at least a rendition of it - camarones, tomate, ajo, cebolla and queso steamed in a tinfoil pack.  It was delicious- 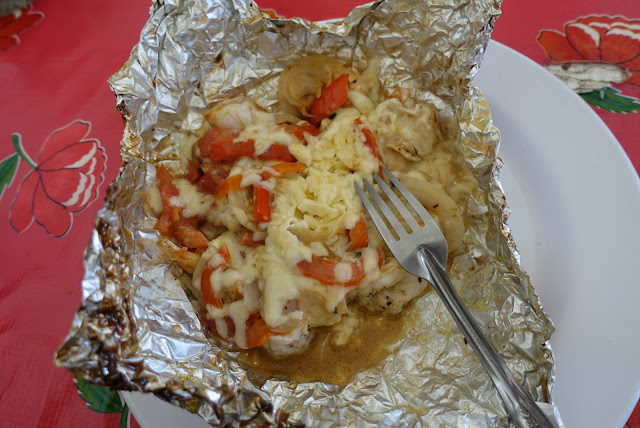 I spent the afternoon writing my Christmas letter and booking buses and Air BNBs for my upcoming trip.  I’ve said it before - it’s so much work!

At 4:40, I left for church which was to begin at 5.  No, no, no - we are on Mexican time. Already there was an American couple - she was practicing the flute with the minister- 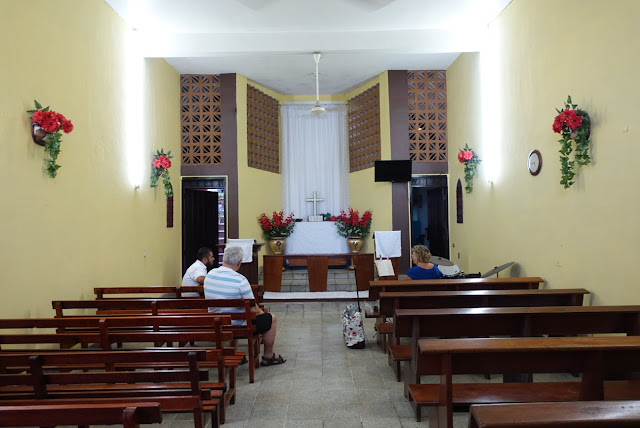 who was playing the guitar- 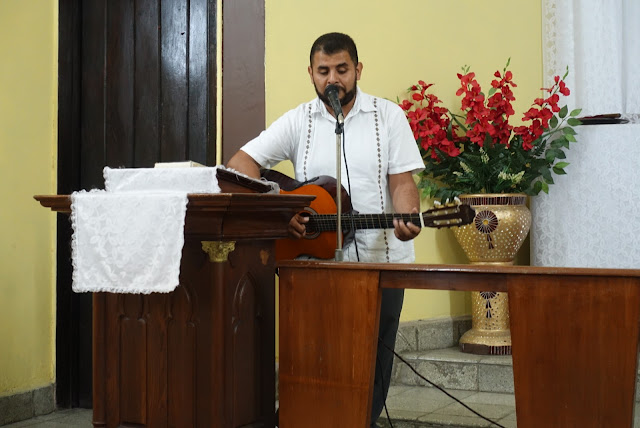 She was a blowbag American.  They’ve been coming here for months at a time since 1987 and neither can speak Spanish.  She’s responsible for starting the only four hospices in the whole country so I’ll give her that but her husband was a whipped wimp and she talked a lot about herself.  She’s the first person I’ve met on this trip I didn’t like.

Anyway, apparently, the congregation of what?  two?  doesn’t have a minister and this fellow came from a not so close village for tonight’s service.  This meant there would be communion.  Soon, a family of four arrived and then we waited.  What for, I wasn’t sure but at about 5:20, five adults walked in - Mom and Dad and their three grown daughters.  They were from the same village as the minister and the Mom and two of her three daughters are high school teachers.  Everyone was super welcoming - shaking my hand, asking my name, kissing me on the cheeks.  And so the service started.  We sang hymns for a long time.  I used a Spanish hymn book- 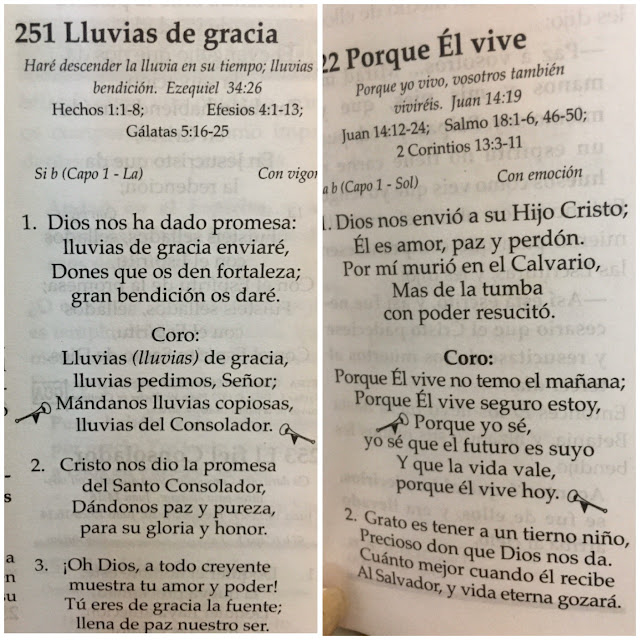 and could keep up except they have to skip a bunch of words for the song to jive with the music. We also read a bunch of Bible verses out loud. I used my phone to find them because there were no Bibles in the church but I couldn’t keep up reading-

No wonder I couldn’t understand much of the twenty minutes of prayer and that was after the woman asked everyone in the congregation what they wanted to pray about and then people said their personal prayers out loud anyway.  Then the Minister started and didn’t stop until quarter to seven.  I was praying - that my phone would buzz and I could politely peace out but no such luck.  Then it was time for the offering. They used a red velvet sack and people put there hand right into it to drop their coins.  Me, big spender, gave $50 which is $3.44.  I left after that.  Holy, for those who don’t think there’s a God, there is, and s/he was getting me back for my absence at church in North Battleford, I’m sure of it!

I’m very comfortable so far on this trip.  I’m enjoying being by myself, but I’m not really alone because I meet people everyday.  I love the independence of having my own apartment, especially when it’s where the action is.  The internet makes it so easy to figure out what to do and the bus system in Mexico is second to none.  It’s so easy to get everywhere and there’s so much to do.  I’m having a great winter and tomorrow is another day!